Making Waves on the Yorkshire Coast
Seaweed and SeaGrown

A place full of promise and exploration, cliff top walks, sheltered bays and breath-taking sea views, the Yorkshire coast is an area of rich contrast and humbling beauty and impressive things are happening along our county’s shores.

SeaGrown is one such exciting coastal adventure!Founded by Wave Crookes, an ex-navy diver, and his partner Laura Robinson, a marine biologist, the two combined their love of the sea and passion for the environment to develop a pioneering seaweed farm off the Scarborough coast. Many smaller scale seaweedharvesting projects do currently exist along the UK’svaried shoreline but, with a 25-acre site, three miles out into the North Sea, SeaGrown's visionary plan is to become the UK’s very first commercial offshore seaweed farm.

Fast growing, hardy and sustainable, there are over 700 remarkable species of seaweed found in British waters and seaweed grows in great abundance along Yorkshire’s coast. Unlike most land plants, seaweeds do not have roots, instead they attach to solid surfaces from which to grow, absorbing necessary nutrients from the water swirling around them. SeaGrown’s farm uses ropes on which to grow the seaweed until the crop is large enough to harvest - fully grown seaweed can grow up to several meters in length. Using a sophisticated anchoring system, SeaGrown are hoping for up to three harvests a year, applying a method which is robust enough to withstand the wild conditions and challenges presented by the North Sea but, which also avoids damage to the seabed and marine life 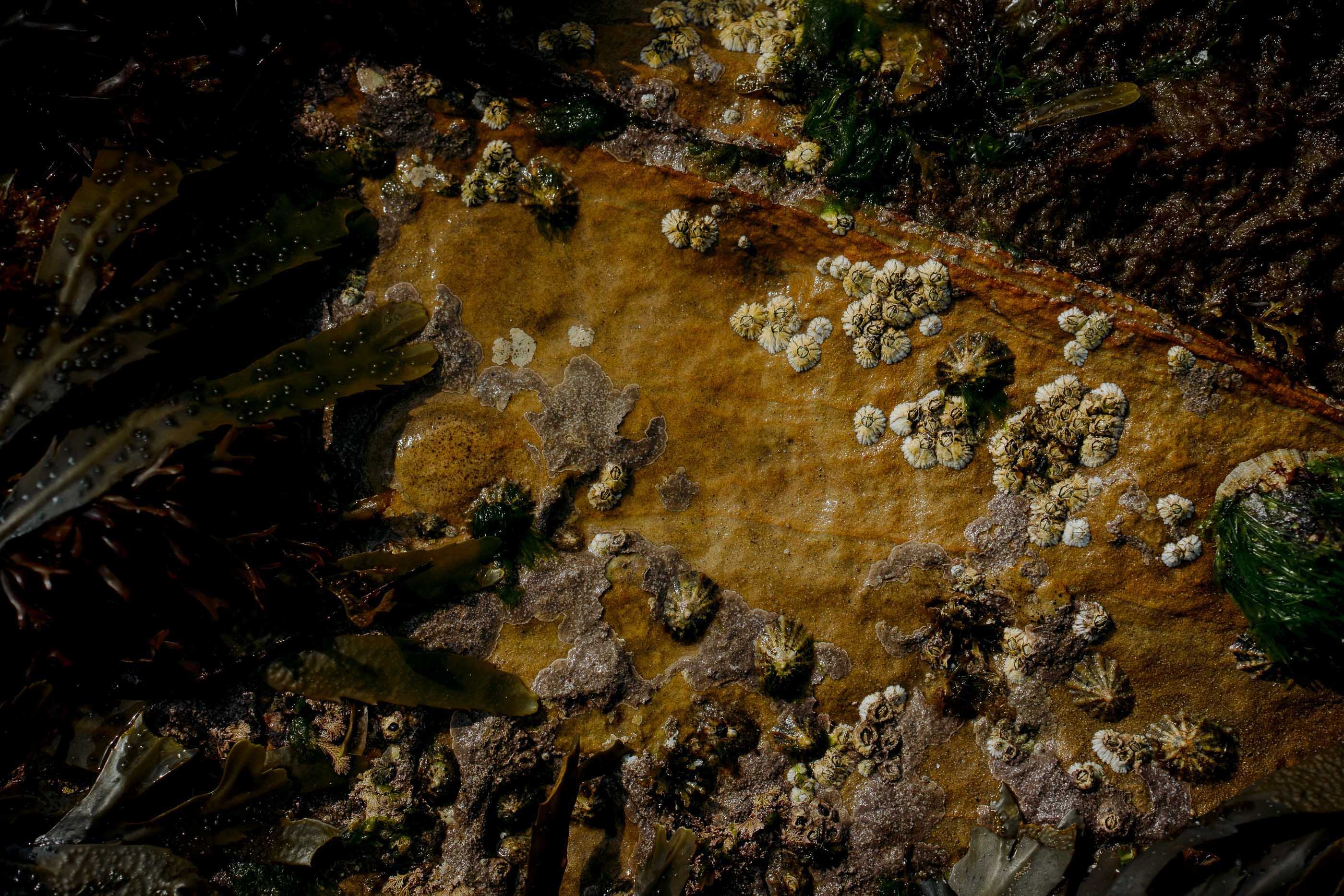 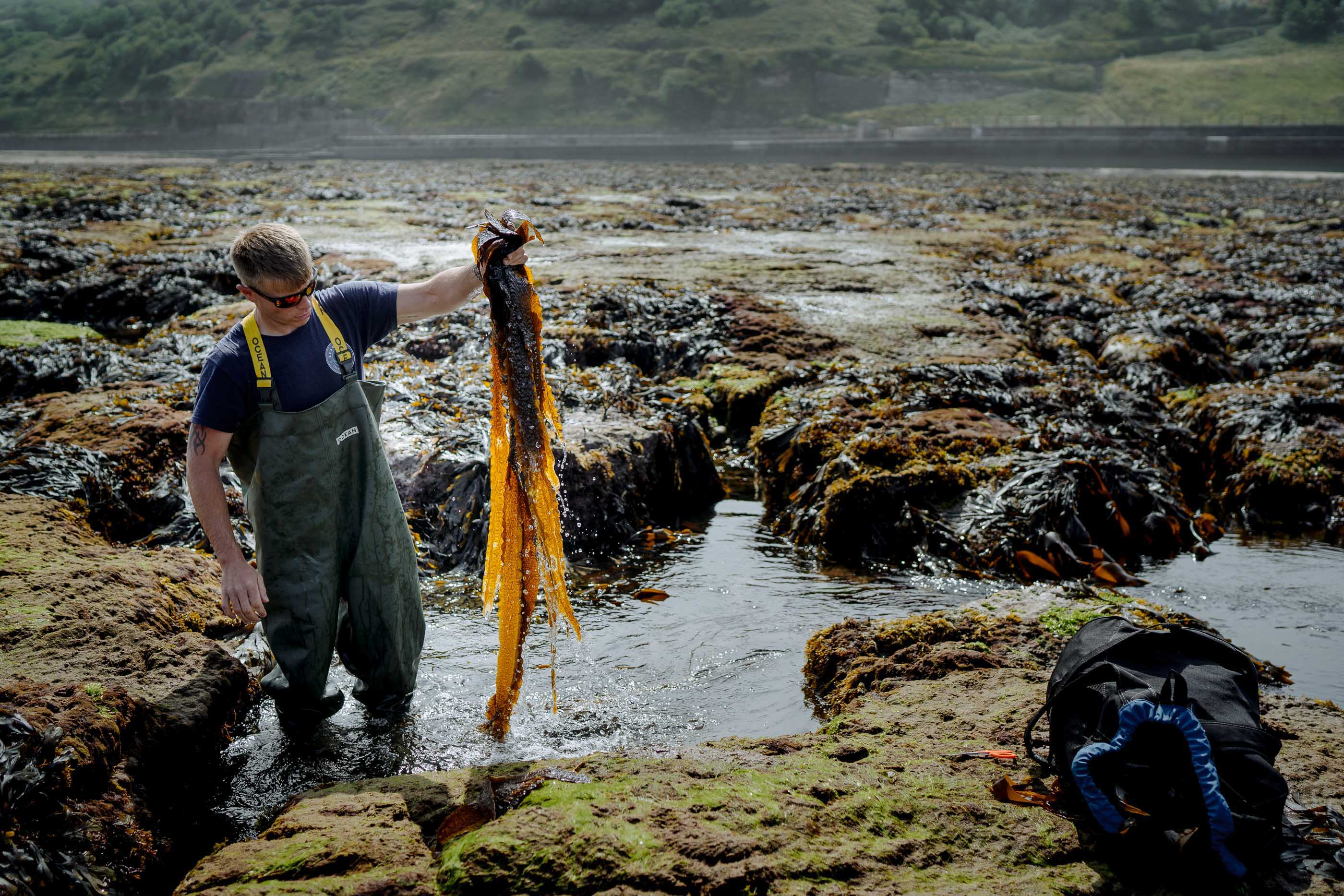 Nature and environmental considerations are at the heart of the work SeaGrown do and the farm requires nothing more than the sun and the clean, cool, open waters of the North Sea for the seaweed crop to thrive, no chemicals or fertiliser are required.

Seaweeds are fascinating marine plants, drawingcarbon dioxide, a major contribution to global warming,out of the atmosphere and releasing oxygen into the water as they grow. Absorbing more carbon dioxide than woodland, scientific research suggests that seaweeds, along with other ocean photosynthetic organisms, produce an amazing 50% to 80% of the air we breathe, in contrast, rainforests are thought to produce around 28%.

From cosmetics and textiles to medicines, biochemicals and bioplastics, seaweed has multiple applications as well as being something of a superfood. Nutrient-rich, seaweed is packed full of beneficial minerals, vitamins,zinc and iron as well as antioxidants and are believed to be responsible for an impressive list of health benefits. These include immunity, cardiovascular function and even overall life expectancy. Seaweed can also act as a thickening and gelling agent in food, eliminating the need for animal products, which makes it an ideal vegan ingredient. Both salty and sweet, seaweed is an incredible natural product, increasingly used for its unique depth of flavour. 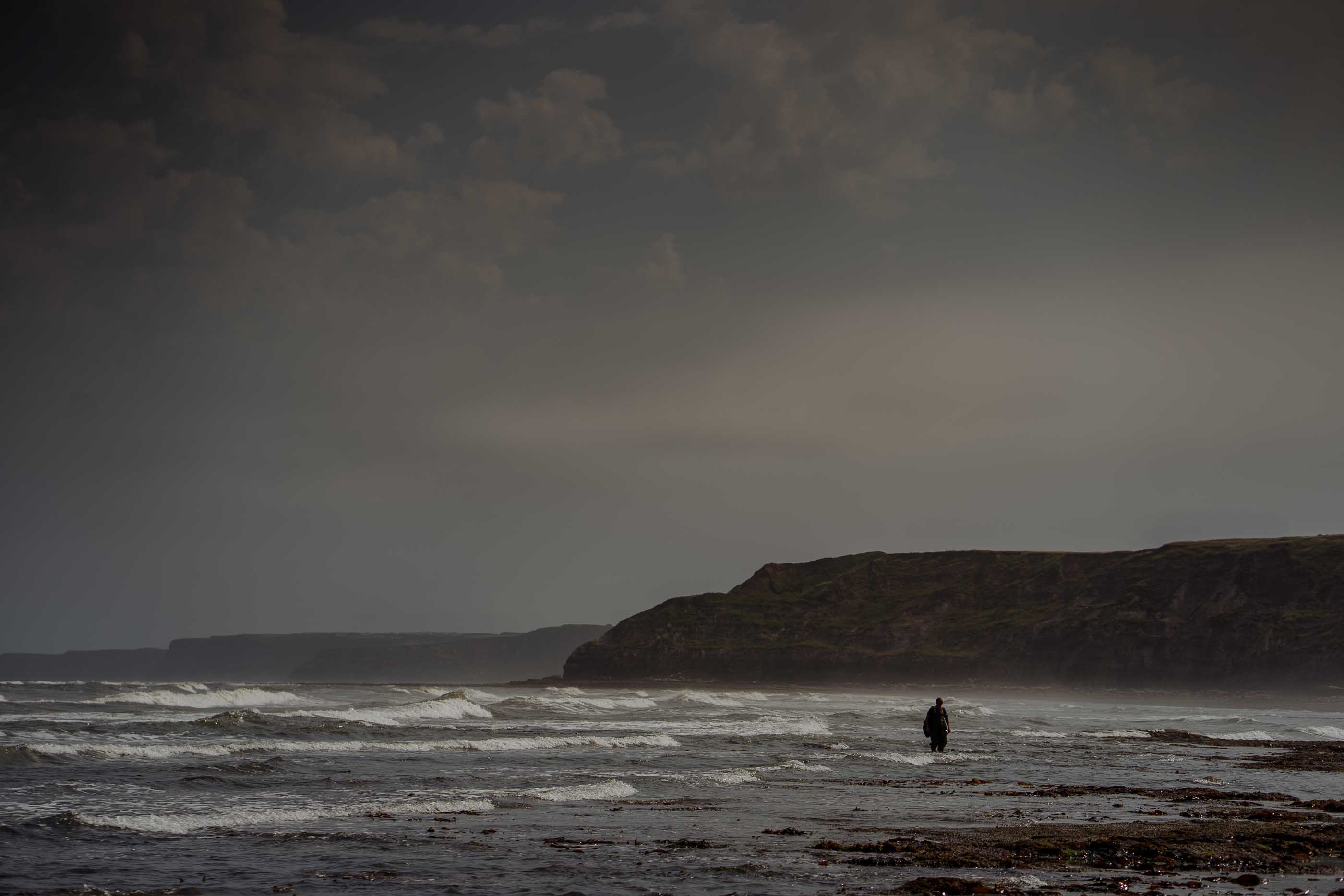 As SeaGrown's seaweed farm continues to establish,it’s possible to find the SeaGrown team hand-harvesting on the Yorkshire shoreline during low tide. SeaGrown has been granted a license to collect seaweed on the Yorkshire coast and, using a variety of carefully chosen and rotated rocky outcrops, the team harvest the wild grown seaweed using only reusable mesh bags and scissors. In-keeping with their commitment to responsible farming, they diligently monitor the sustainability of harvesting this way.

Much of the seaweed collected by SeaGrown on the shore is currently used as a culinary ingredient and SeaGrown produce their own range of seaweed seasonings.

As avid explorers of both Yorkshire and the produce and tastes provided by the region, our Yorkshire Explorer rum uses Sugar Kelp, harvested by SeaGrown, to bring that unique taste of the sea to our carefully perfected recipe. We are very proud to work with local producers and of our seaweed rum, launched earlier this year, which was a very special collaboration with SeaGrown. Using their wild grown Sugar Kelp ties us perfectly back to the Yorkshire landscape, exploration and the outdoors, which is at the very heart of the Yorkshire Explorer ethos. 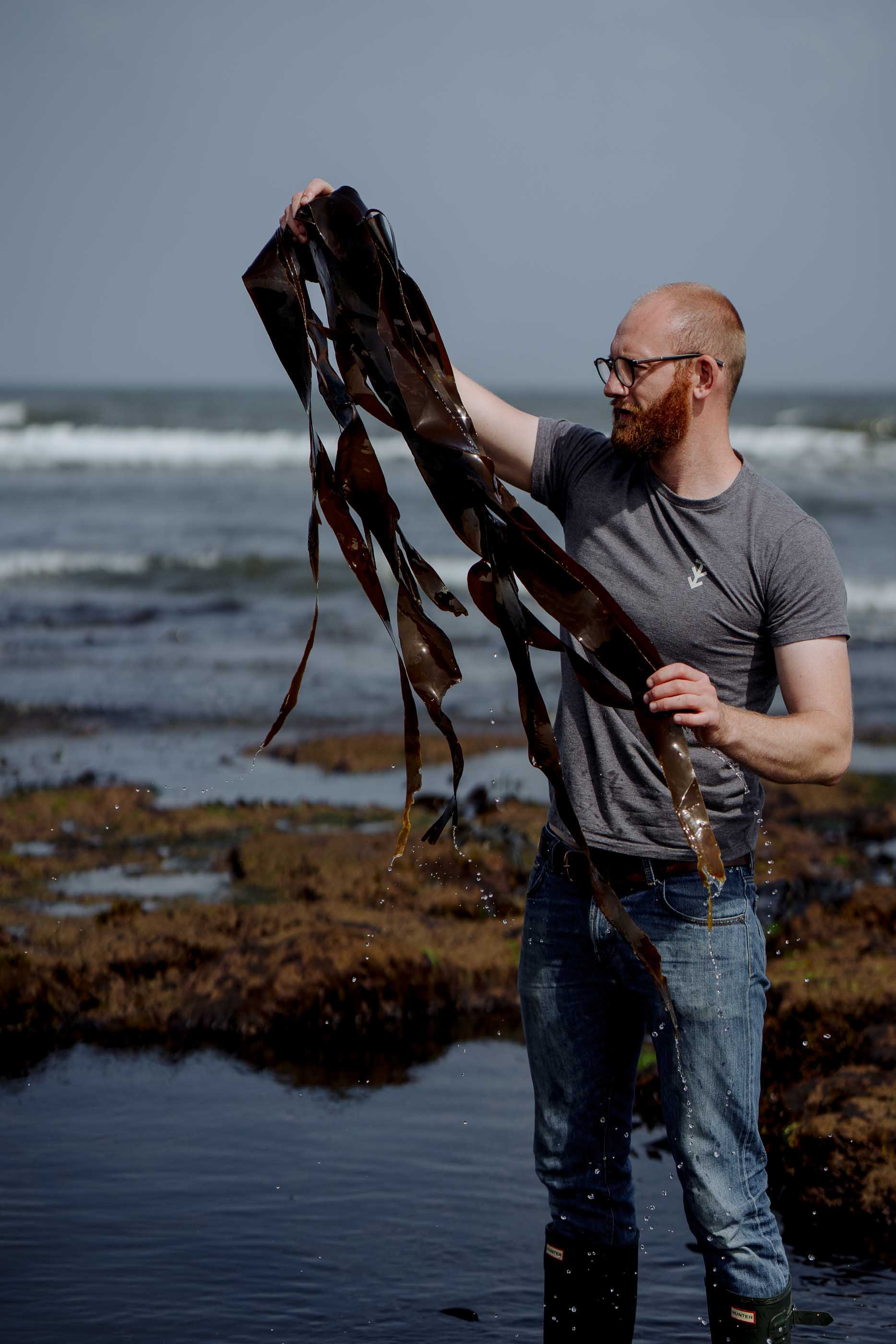 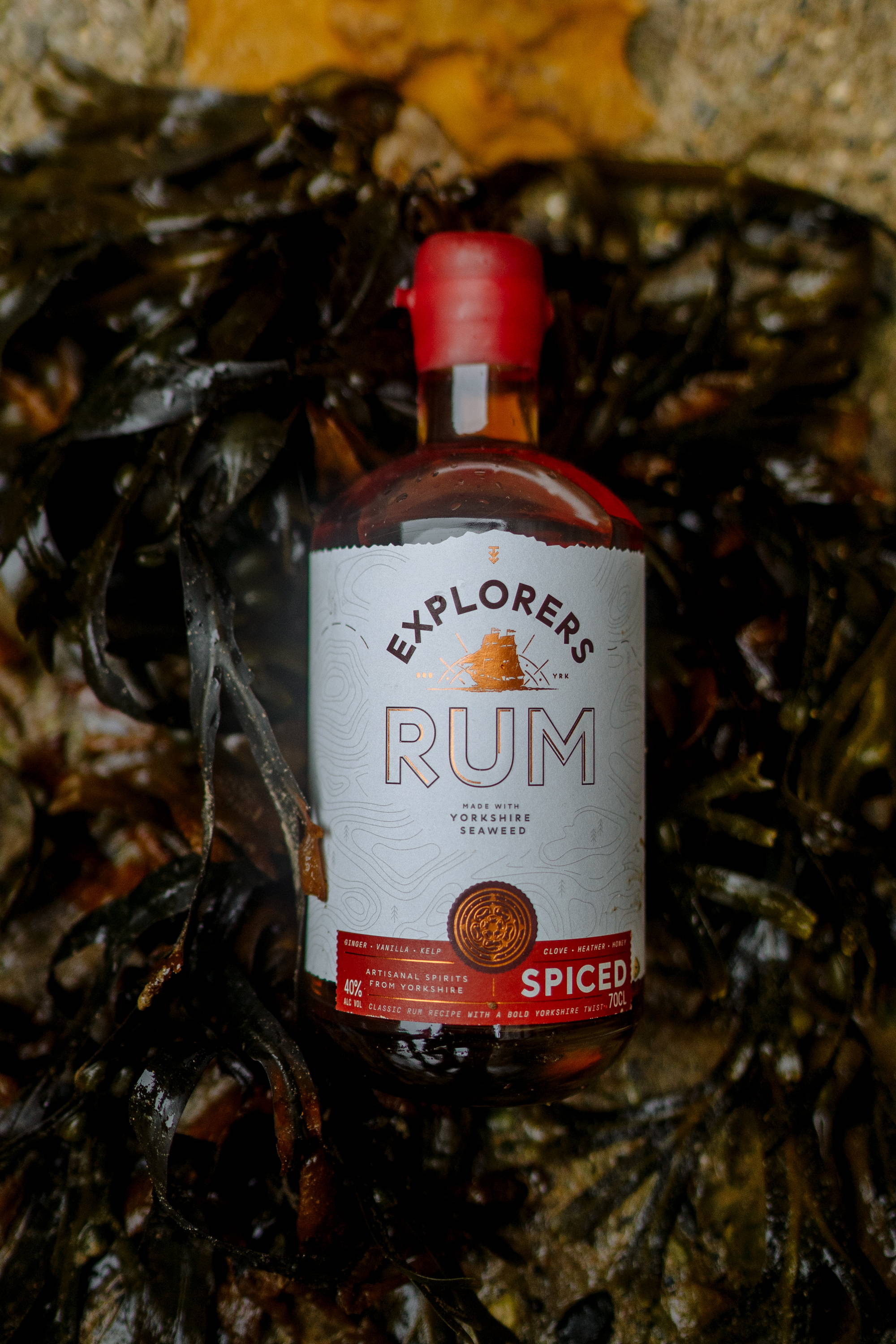 Distilled in Yorkshire, Explorer Rum is made with Sugar Kelp grown on the Yorkshire coast.

Sugar Kelp is combined with the sweetness of vanilla, locally foraged heather and honey, and the rich warmth of clove and ginger to create the Explorer’s unique sweet and salty flavour profile, which is as rich in flavour as it is in the provenance of its ingredients.

Each bottle is hand finished, checked for perfection and sealed.

Sign up to hear our latest news and offers